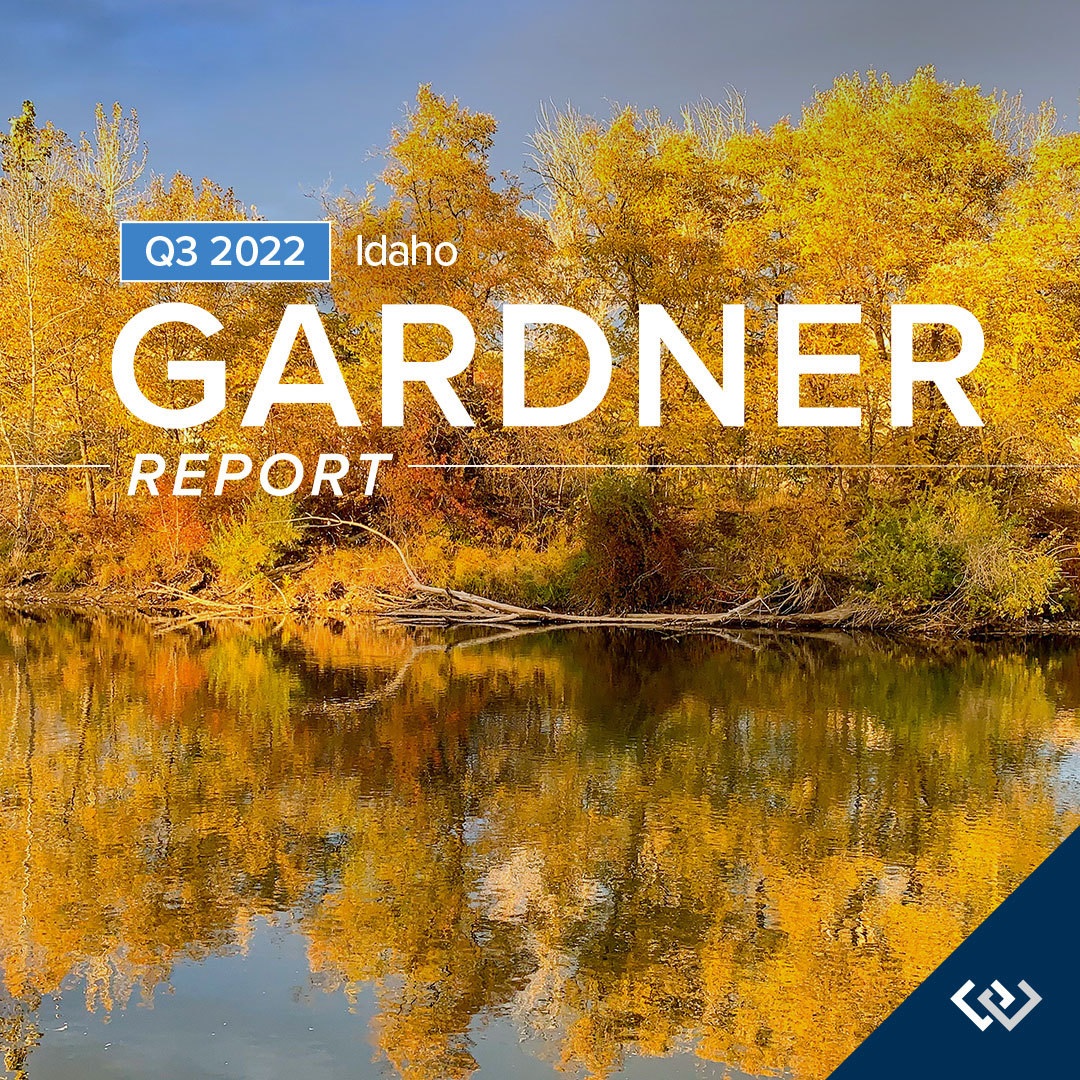 The following analysis of select counties of the Idaho real estate market is provided by Windermere Real Estate Chief Economist Matthew Gardner. We hope that this information may assist you with making better-informed real estate decisions. For further information about the housing market in your area, please don’t hesitate to contact your Windermere Real Estate agent.

Employment in Idaho continues to grow, but the pace has started to taper. The addition of 22,400 jobs over the past 12 months represents a growth rate of 2.8%. Idaho’s third-quarter unemployment rate was 2.7%, down from 3.5% a year ago. This is higher than the all-time low in May and June of this year, but very impressive all the same. Although jobs are being added at a slower pace, I am not concerned given the current unemployment rate and the growing labor force.

❱ Listing activity was up 53% compared to a year ago. The average number of homes on the market was 9.1% higher than in the second quarter of 2022.

❱ Pending sales were 19% lower than in the second quarter of this year. With more listings and fewer sales, the market is certainly slowing, much of which can be attributed to rising mortgage rates, which hit a level we have not seen since 2008. 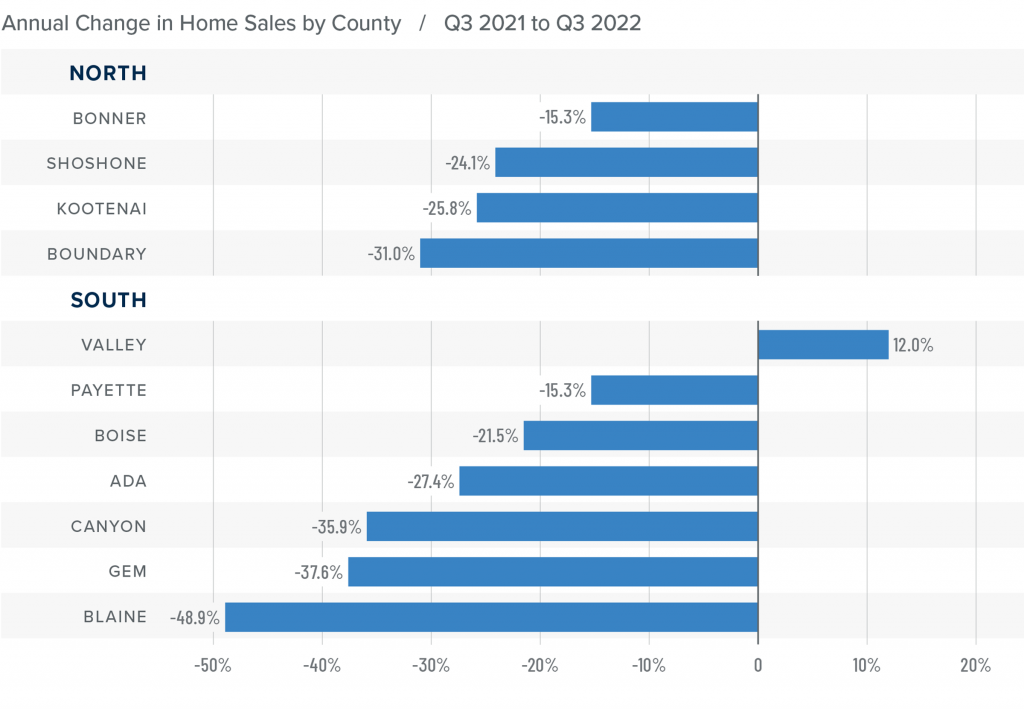 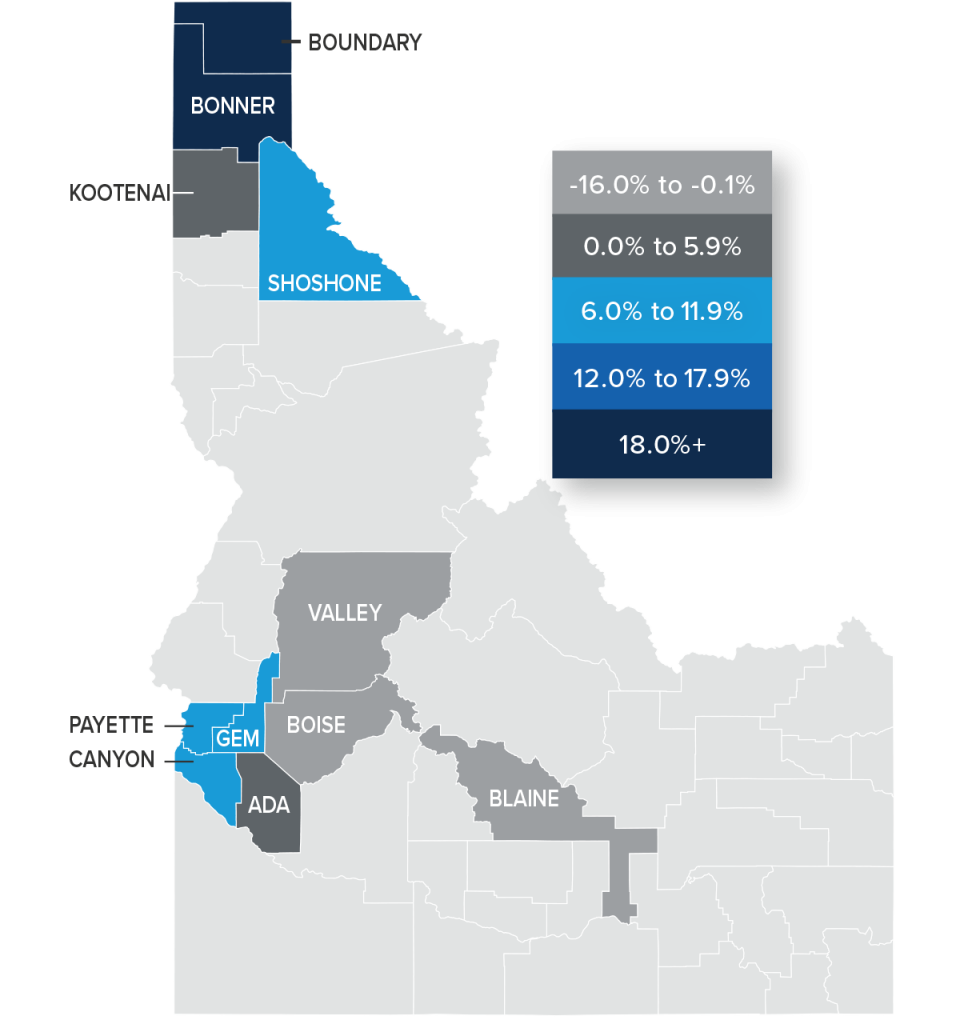 ❱ Compared to the second quarter of 2022, prices rose in all Northern Idaho counties except Kootenai, where they were down 1.7%. In the southern part of the state, prices fell across the board.

❱ Prices rose by double digits in Bonner and Boundary counties, while the balance of Northern Idaho counties saw single-digit growth. In the southern part of the state, prices rose in four of the counties, but fell in Boise, Valley, and Blaine counties.

❱ Median listing prices in the second quarter were lower in all southern markets, but higher in all but Bonner County in the northern part of the state. 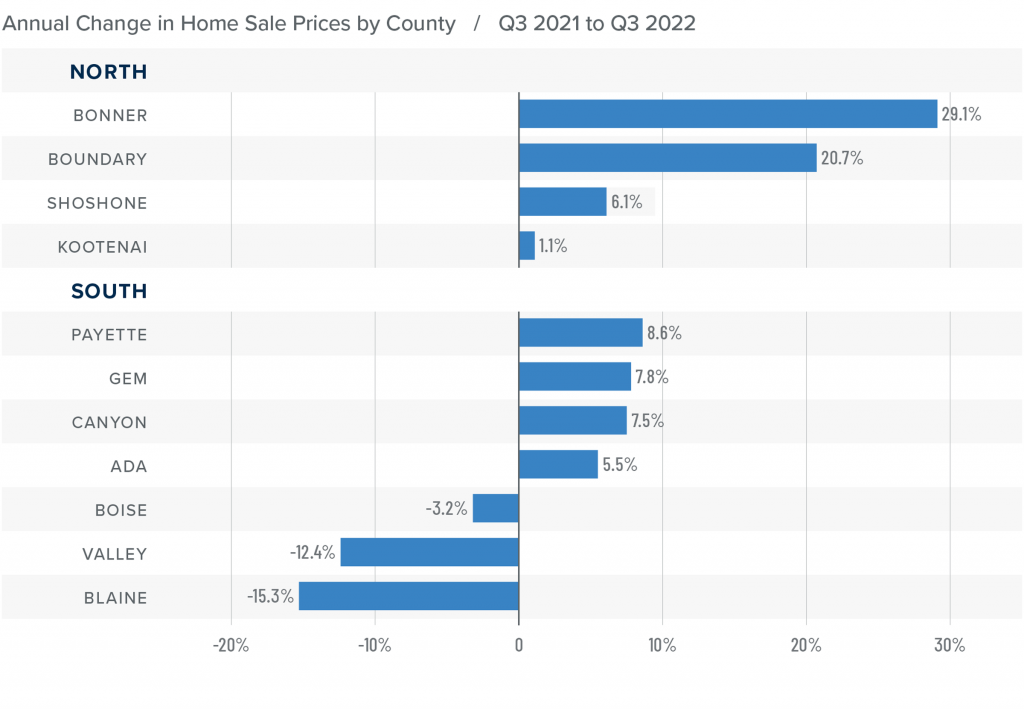 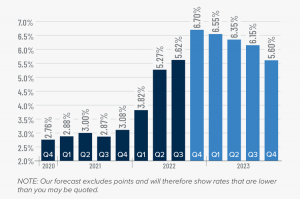 This remains an uncertain period for mortgage rates. When the Federal Reserve slowed bond purchases in 2013, investors were accused of having a “taper tantrum,” and we are seeing a similar reaction today. The Fed appears to be content to watch the housing market go through a period of pain as they throw all their tools at reducing inflation.

As a result, mortgage rates are out of sync with treasury yields, which not only continues to push rates much higher, but also creates violent swings in both directions. My current forecast calls for rates to peak in the fourth quarter of this year before starting to slowly pull back. That said, they will remain in the 6% range until the end of 2023.

❱ In Northern Idaho, days on market rose in all counties other than Kootenai compared to a year ago. Market time rose in every county other than Blaine in Southern Idaho.

❱ It took an average of 74 days to sell a home in Northern Idaho, and 37 days in the southern part of the state.

❱ Homes sold the fastest in Ada County in the southern part of the state and in Shoshone County in Northern Idaho. 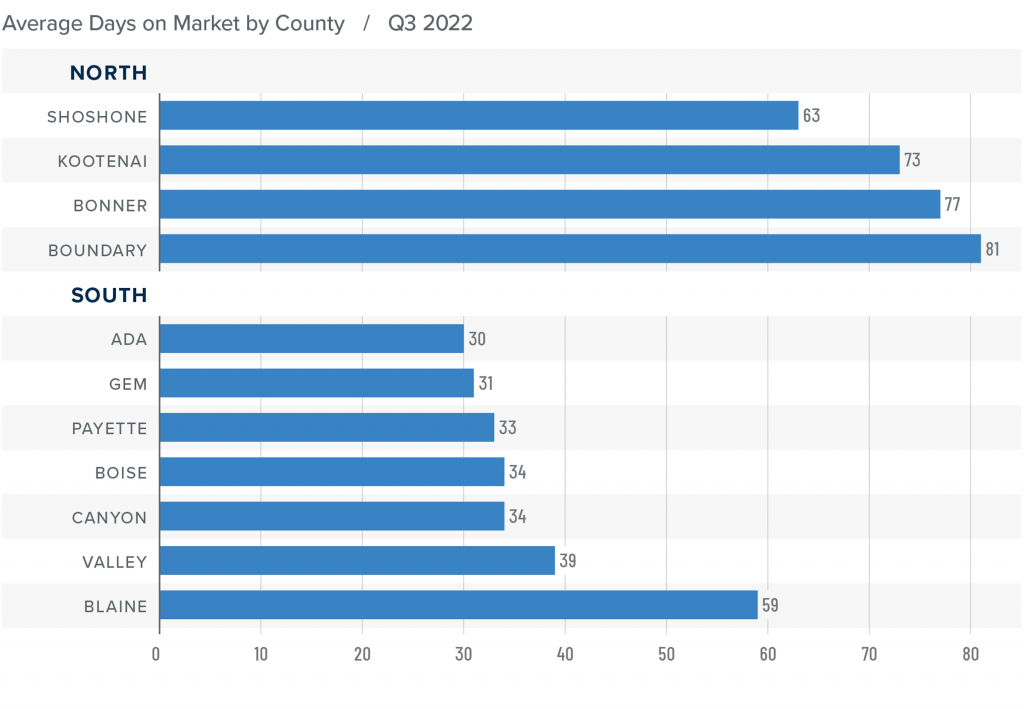 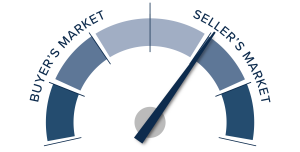 The third quarter appears to have been an inflection point: the impact of higher mortgage rates and lower affordability have now started to negatively affect home sales and prices. With mortgage rates likely to remain very high compared to recent years, the massive run-up in home values is at an end. Although the market will continue to be negatively impacted as we move through the winter and into the spring, I don’t see it falling in a manner similar to the Great Recession. Owners are sitting on significant equity. Even if prices fall in 2023, which I expect, the decline will be relatively modest.

With a contracting market, I expect that many homeowners who were thinking about selling will decide to stay put and ride out the slowdown. This will mean the number of homes for sale is unlikely to grow significantly from current levels. Given all the data discussed here, I am moving the needle more toward balance, but we are still not in a typical buyer’s market at the present time. 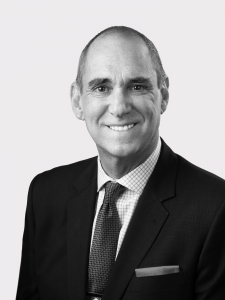 As Chief Economist for Windermere Real Estate, Matthew Gardner is responsible for analyzing and interpreting economic data and its impact on the real estate market on both a local and national level. Matthew has over 30 years of professional experience both in the U.S. and U.K.